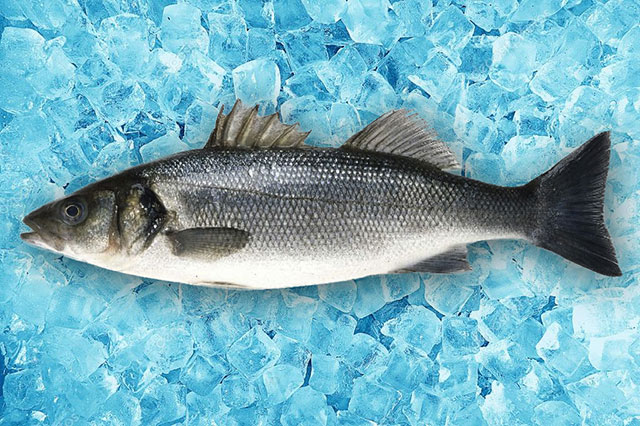 The European bass (Dicentrarchus labrax) is a primarily ocean-going fish native to the waters off Europe's western and southern and  Africa's northern coasts, though it can also be found in shallow coastal waters and river mouths during the summer months. It is one of only six species in its family, Moronidae, collectively called the temperate basses.It is both fished and raised commercially, and is considered to be the most important fish currently cultured in the Mediterranean. In the British Isles, the popular restaurant fish sold and consumed as sea bass is exclusively the European bass.[2] In North America it is widely known by its Italian name branzino.[3]European bass can reach sizes of up to 1 m (3.3 ft) in length and 12 kg (26 lb) in weight, though the most common size is only about half of that at 0.5 m (1.6 ft). Individuals are silvery grey in color and sometimes a dark-bluish color on the back.Juveniles form schools and feed on invertebrates, while adults are less social and prefer to consume other fish. They are generally found in the littoral zone near the banks of rivers, lagoons, and estuaries during the summer, and migrate offshore during the winter. Despite being a sought-after gamefish, it is listed as Least Concern by the International Union for the Conservation of Nature because it is widespread and there are no known major threats.

The European bass was first described in 1758 by Swedish zoologist Carl Linnaeus in his work Systema Naturae. He named it Perca labrax. In the century and a half following, it was classified under a variety of new synonyms, with Dicentrarchus labrax winning out as the accepted name in 1987. Its generic name, Dicentrarchus, derives  Greek from the presence of two anal spines, "di" meaning two, "kentron" meaning sting, and "archos" meaning anus. The European bass is sold under dozens of common names in various languages. In the British Isles it is known as the "European bass," "European seabass," "common bass," "capemouth," "king of the mullets," "sea bass," "sea dace," "sea perch," "white mullet," "white salmon," or simply "bass."[4] M. mississippiensisM. chrysopsM. americanaM. saxatillis D. punctatusD. labraxPhylogenetic tree of Moronidae based on the mt-nd6 protein.[5]There are two genetically distinct populations of wild European bass. The first is found in the northeast Atlantic Ocean and the second is found in the western Mediterranean Sea. The two populations are separated by a relatively narrow distance in a region known as the Almeria-Oran oceanographic front, located east of the Spanish city of Almería. The exact reason for this separation is unknown, as the geographic divide itself should not account for a lack of  gene flow between the two populations. The larval stage of the European bass can last up to 3 months, during which it is unable to swim well, and even a small amount of water flow should transport some individuals between the two regions. In addition, juveniles are able to survive temperature and salinity changes and adults are capable of migrating hundreds of miles.[6].

Its habitats include estuaries, lagoons, coastal waters, and rivers. It is found in the waters in and around Europe, including the eastern Atlantic Ocean (from Norway to Senegal), the Mediterranean Sea, and the Black Sea.It is a seasonally migratory species, moving further inshore and north in summer.