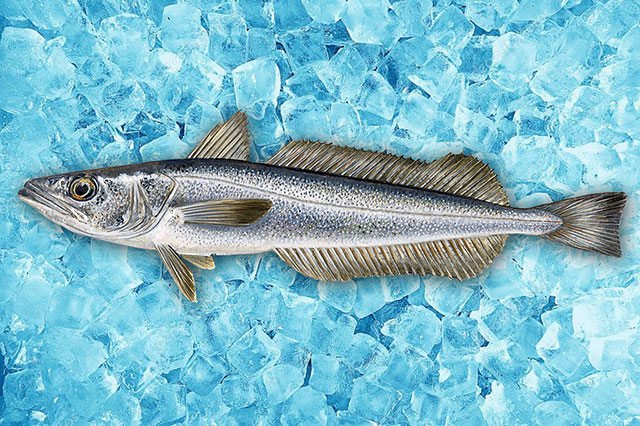 Hake is in the same taxonomic order (Gadiformes) as cod and haddock. It is a medium to large fish averaging from 1 to 8 pounds (0.45 to 3.63 kg) in weight, with specimens as large as 60 pounds (27 kg).[2] The fish can grow up to 1 metre (3 ft 3 in) in length with a lifespan as long as 14 years. Hake may be found in the Atlantic Ocean and Pacific Ocean in waters from 200–350 metres (660–1,150 ft) deep. The fish stay in deep sea water during the day and come to shallower depths during the night. An undiscerning predator, hake feed on their prey found near or on the bottom of the sea. Male and female hake are very similar in appearance. [3]After spawning, the hake eggs float on the surface of the sea where the larvae develop. After a certain period of time, the baby hake then migrate to the bottom of the sea, preferring depths of less than 200 metres (660 ft).

The highest demand for hake has been in Europe. Hake has been primarily divided into three principal levels—fresh, frozen, and frozen fillet. Fresh hake is mainly supplied by European production and imports. Frozen hake and frozen hake fillet are effectively supplied by imports and European processing companies.Spain has the highest consumption of hake in Europe, with a yearly consumption of 6 kg/person. This works out to around half all hake eaten in Europe. Though Spanish consumption of hake and other fish declined in the last decade (second fish consumption in the world after Japan), hake still accounts for about one third of total fish consumption there. Other countries that eat a lot of hake include France, Italy, and Portugal.[5]In Spain, fresh hake are mostly purchased by restaurants through retailers. Nonetheless, processed hake products are distributed by hake wholesalers. Fishmongers, public markets and hypermarkets sell hake in various forms: frozen fillet, fillet skin-on, fillet skin-off, etc.In France, fish are generally purchased in supermarkets. Due to insufficient European hake, French  wholesalers purchase fresh hake from external countries such as Argentina and Namibia, and then export them to Spain. Fresh hake is mostly exported to Spain.In Italy, hotels, restaurants, supermarkets, and institutional purchasers purchase much seafood. However, retailers and wholesalers purchase most frozen hake fillets to sell in markets.

The main catching method of deep-water hake is primarily trawling, and shallow-water hake is mostly caught by inshore trawl and longlining. Hake are mostly found in the Southwest Atlantic (Argentina and Uruguay), Southeast Pacific (Chile and Peru), Southeast Atlantic (Namibia and South Africa), Southwest Pacific (New Zealand), and Mediterranean and Black Sea (Italy, Portugal, Spain, Greece and France).Over-exploitationDue to over-fishing, Argentine hake catches have declined drastically. About 80% of adult hake has apparently disappeared from Argentine waters. Argentine hake is not expected to disappear, but the stock may be so low that it is no longer economic for commercial fishing.[6] In addition, this adversely affects employment, because many people lose their jobs in the fishing industries. On the other hand, Argentine hake prices are rising due to scarcity. This has reduced exports, which ultimately affects the economy.[7]In Chile, seafood exports, especially Chilean hake, have decreased dramatically. Hake export has decreased by almost 19 percent. The main cause of this decline is the February 2010 Chile earthquake and tsunami. These disasters destroyed most processing plants, especially manufacturing companies that produce fishmeal and frozen fillets.[8]European hake catches are well below historical levels because of hake depletion in the Mediterranean and Black Sea. However, different factors might have caused this decline, including a too-high Total Annual Catch, unsustainable fishing, ecological problems, juvenile catches, or non-registered catches.According to the Worldwide Fund, the only Hake species not currently over-fished is Cape hake, found in Namibia.[9] Namibia is the only country that has increased its hake quota, from 130,000 tonnes in 2009 to 145,000 tonnes in 2010.[10] Furthermore, the Local Ministry of Fisheries adheres to very strict rules regarding the catch of hake. For example, the closed seasons for hake lasts approximately two months, September and October, depending on the level of stock. This rule has been applied to ensure the regrowth of the hake population. Supplemental restrictions include forbidding trawling for Hake in less than 200 m depth (to avoid damaging non-target species habitat)and minimizing by-catch.