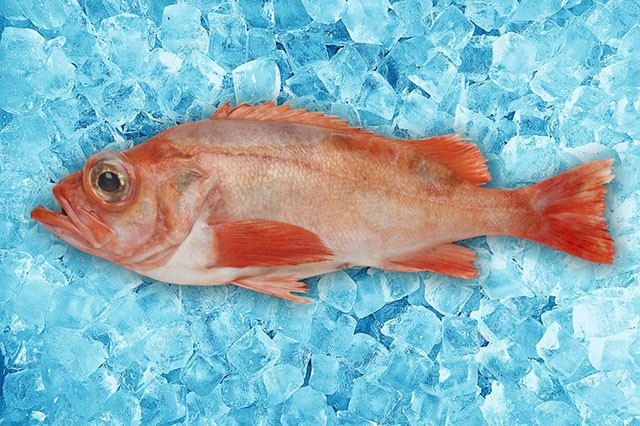 Also called ocean perch, even though it isn't a perch at all, redfish have a short body with a large head and wide, gaping mouth. They have a row of short dorsal spines followed by a flat dorsal fin and a small tail with a shallow indent. Adults range in colour from bright orange (S. marinus) to bright red (S. mentella). S. marinus grow to a maximum length of about 70 centimetres, while S. mentella grow to about 60 centimetres. Much as the age of a tree is calculated by counting the rings in its trunk, the age of a redfish is determined by counting the rings on the otoliths (small bones in the fish's middle ear). They often live to be 40 years old.

Redfish, members of the scorpion fish family, are found in the north Atlantic Ocean. Redfish comprise two major species, Sebastes marinus and Sebastes mentella, the latter of which is further subdivided into two species (S. mentella and S. fasciatus). Generally speaking, all of these fish are treated as one and the same by everyone outside of the scientific community-they are virtually impossible to tell apart. In the western Atlantic, redfish range from Baffin Island to New Jersey, living in rocky areas at depths of up to 700 metres (S. mentella is usually found in shallower water than S. marinus, however).