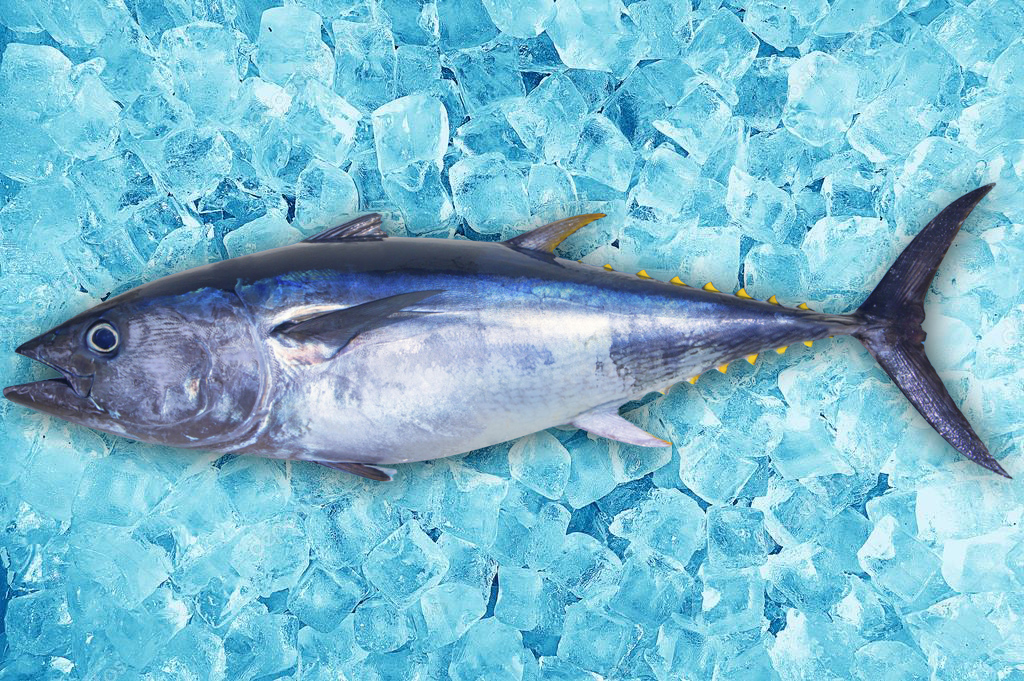 Yellowfin tuna (Thunnus albacares) is a mid-sized tuna, with commercially harvested fish ranging from 30 to 170 cm in length and weighing up to 90 kg. It has a dark blue-to-black coloured back, with silvery sides and bright yellow fins. Larger yellowfin are characterized by large, sickle-shaped second dorsal and anal fins.Smaller yellowfin (juveniles) form mixed schools with skipjack and juvenile bigeye tunas, and are mainly found on surface waters. Larger fish also swim in schools with other fish and marine mammal species of similar or larger size, including dolphins, porpoises, whales, and whale sharks.Yellowfin is widely distributed in tropical and sub-tropical waters of the Atlantic, Pacific and Indian Oceans. At the northern edge of their range, yellowfin are also found throughout the year in Atlantic Canadian waters along the edge of the Gulf Stream and Georges Bank, the Scotian Shelf and the Grand Banks. Yellowfin are normally found in the Pacific waters of Canada but are not harvested by the Canadian fleet which typically targets North Pacific albacore..

Yellowfin tuna are epipelagic fish that inhabit the mixed surface layer of the ocean above the thermocline. Sonic tracking has found that although yellowfin tuna, unlike the related bigeye tuna, mostly range in the top 100 m (330 ft) of the water column and penetrate the thermocline relatively infrequently, they are capable of diving to considerable depths. An individual tagged in the Indian Ocean with an archival tag spent 85% of its time in depths shallower than 75 m (246 ft), but was recorded as having made three dives to 578, 982, and 1,160 m (3,810 ft).